Home >Traveling to Norway on a Cruise Ship

Norway, perhaps more than any other country, lends itself to the cruise ship traveler. With thousands of kilometers of coastline and the world’s largest concentration of fjords, it’s the perfect place to consider when looking for your next cruise ship destination.

Norway’s coast has a uniquely beautiful landscape that shouldn’t be missed. It’s connected to a network of sapphire-blue fjords and stunning mountains that emerge dramatically from the sea.  Throw in spectacular waterfalls, charming villages, historical places, and interesting local cuisine (hello, seafood!), and you’ve got the recipe for an epic holiday adventure.

People have different preferences in what they want out of their cruising experience and Norway offers plenty of options to satisfy every type of traveler. 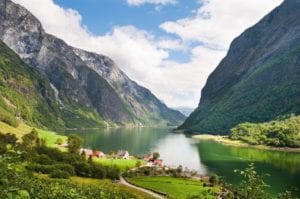 Because the Norwegian fjords are so deep, they allow even the largest ships the ability to venture into them. Being on a cruise ship offers great vantage points from which to see the spectacular scenery surrounding you. The fjords also offer a unique experience as you’re able to venture away from the bustling cities normally associated with cruise ports and disembark in the middle of traditional villages and get a taste of Norwegian daily life.

If bigger cities are on your list though, don’t fret. The fjord cruises also stop in the larger ports of Bergen, Stavanger, and Ålesund. These larger ports offer historically striking architecture, interesting museums, and lots of shore excursions to maximize your time in town.

The large cruise ships also offer many other benefits than just the ability to see the fjords with unparalleled views. Incredible cuisine, comfortable lodging, and endless activities for couples, families, and the solo traveler abound. Cruising through the fjords is great for those night-owls as well as you have the luxury to view the changing landscape around you as you journey through the night.

If you’re cruising during the high season of the summer months, you’ll have the benefit of the midnight sun and really be able to take advantage of the breathtakingly beautiful views, no matter what time it is.

The iconic red, black, and white Hurtigruten cruises are a fixture of Norwegian maritime travel. The Hurtigruten provides daily, year-round travel between Bergen and Kirkenes. While not as luxurious as the big ocean liners, these cruises offer a great way to see the spectacular Norwegian coast. Did you know if you were to stretch out the Norwegian seashore (including fjords, bays, and island shores) into a straight line it would circle the earth two and a half times? Impressive!

A benefit of cruising with the Hurtigruten is it allows you to cruise a lot closer to the coastline than the large cruise ships. Many of the ships also boast amenities such as gyms, hot tubs, and children’s play areas. With 34 ports of call on the northbound sailings and 33 on the southbound, you can embark on both round-trip and one-way coastal voyages.

There is also the option of joining various day excursions at most ports. If traveling in the end of September through the end of March, we recommend you head north and join the Hurtigruten in search of the Northern Lights. And if you’re really up for a unique experience, the Hurtigruten can take you all the way up north to Svalbard.

The beautiful city of Bergen is popular with tourists. Not only is it the starting point for the Hurtigruten, but many of the big ships dock here as well. With a population of approximately 280,000, Bergen has a lot to offer.

Most of the sights are within walking distance from the port. Don’t miss the old wharf of Bryggen (a UNESCO World Heritage Site), and a ride on the funicular to the top of Mount Fløyen for spectacular views over the city.

The medieval church of Domkirke is another sight not to miss while in town. There are also plenty of great museums in Stavanger, such as the Canning Museum and the Viking House. If time allows, visit the beautiful Lysefjord and world-famous Pulpit Rock.

The Art Nouveau city of Ålesund is not to be missed. After most of the city was lost in a catastrophic fire in 1904, the city was rebuilt in the striking Jugendstil (Art Nouveau) style. Often dubbed the “Venice of the North”, Ålesund serves as a great base from which to explore the nearby UNESCO World Heritage Site of Geirangerfjord (If your ship isn’t headed there) and the famous Troll Road and Troll Wall.

If you’ve only got a half-day in port however, there is still plenty to do: wander the cobblestone streets and visit the Jugendstil museum, climb the 418 steps to Mount Aksla for a stunning view over the city (busses are also available!), or take a trip out to the neighboring islands.

Geiranger is a quaint village at the head of the UNESCO World Heritage Site of Geirangerfjord. The fjord is probably the most famous of the Norwegian fjords and it’s easy to see why. It is simply stunning.

As you approach Geiranger by ship you’ll get a great view of the Seven Sisters waterfalls. Disembark and stroll around the shops and cafes or hop on an excursion up to Dalsnibba and the Geiranger Skywalk for great views over this special place.

Weather and What to pack

No matter what port you’re in, the weather in Norway can be unpredictable. In Norway we say, “There is no such thing as bad weather, only bad clothing.” It might seem like a daunting task to pack for a trip to a destination with this motto, but as long as you bring layers (including rain gear) and some sturdy shoes you should be just fine.

Leave the heavy-duty hiking boots at home unless you’re headed on a backpacking excursion in the mountains. And don’t worry, if you do forget something, you’ll be able to pick it up in the larger towns. Norwegians love their outdoor clothing stores!

With stunning nature and vibrant cities, we think that when it comes to cruise ship vacations, Norway is a tough one to beat. 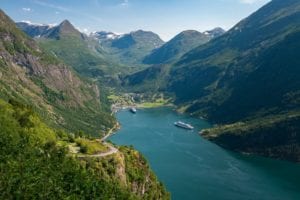