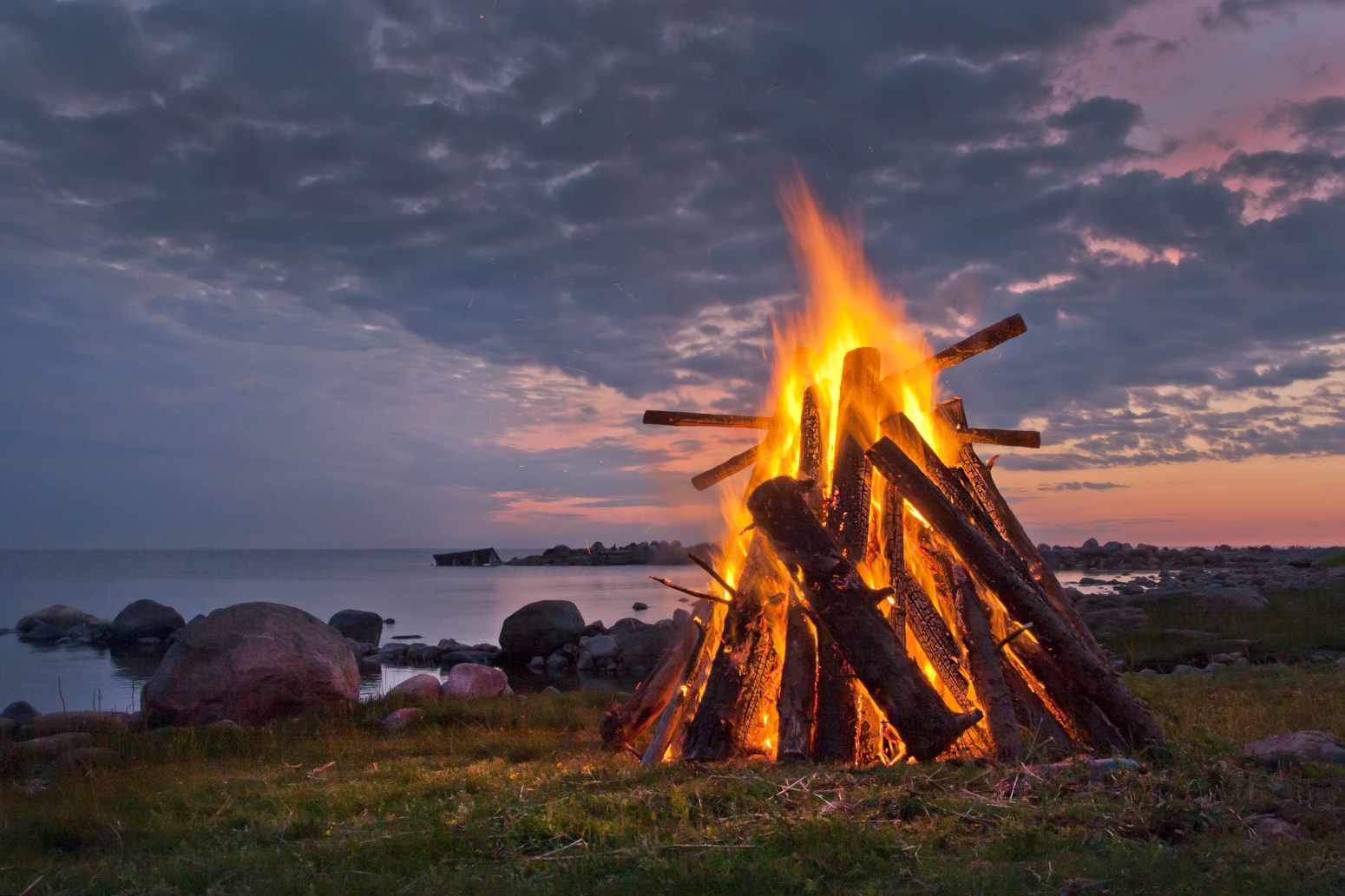 Summer is finally here and in Norway that means it’s time for Midsummer celebrations. In fact, Midsummer has been celebrated throughout Europe for thousands of years. It’s a joyous way to mark the end of the cold, dark days of winter and celebrate the return of the long, warm days of summer filled with endless hours of sunlight. As you might imagine, there are a variety of traditions and ways the summer solstice is celebrated across Europe. Here in Norway an essential component of the celebration is a bonfire. And here in Ålesund, we’re known for the tallest bonfire of all.

The celebration has both religious and secular roots. Sankthans Aften (St. John’s Eve) celebrates the birth of the religious figure Saint John the Baptist who was born on the 24th of June (6 months before the birth of Jesus Christ). Sankthans closely coincides with the summer solstice, also known as Midsummer. The religious holiday is a fixed date of the 24th and while Midsummer celebrations are generally held the night before, this year in Ålesund we will be celebrating on the 26th.  The celebrations of Midsummer observe and celebrate the powerful forces of nature: light, dark, plants, and fire. In earlier times, medicinal herbs were thought to be more potent if picked on midsummer’s eve. Young girls would gather flowers and place them beneath their pillows to dream of whom they were to marry. Bonfires were lit to ward off evil spirits.

In fact, it is this tradition that has become the most essential element in Norway’s Midsummer celebrations: lighting bonfires, particularly along the coast. Most cities and villages build small bonfires for the community to celebrate, but Ålesund has taken it a bit further and created the world’s tallest bonfire. Ålesund used to have hundreds of bonfires located in various spots around the city, but today there is only one left – the mighty Slinningsbålet.

On the small islet of Slinningsholmen just off of the island of Hessa, Slinningsbålet has been lit every year since 1964. This is no ordinary bonfire; this is a structure built with careful planning. Each year after the burning of the bonfire, planning starts immediately for the next year. Construction then begins annually on the first of May. The people who build this impressive structure are local youth who come together, collect materials, and build the bonfire by hand. This is a tradition that has been passed on from generation to generation. The structure is built out of wooden pallets, donated by local companies, and delivered to the islet by boat. As the structure gets taller, the youth employ a “bucket brigade” or human chain method of getting the pallets to the top. People are placed one above another along the length of the structure and pass the pallets overhead to the next person until they reach the top. It’s quite impressive. This year the bonfire is said to reach somewhere between 30-40 m in height. It’s been as high as 47.39 m.

If all of this seems familiar to you it might be because you’ve seen it on television. Initially the goal of the bonfire was to build one that burned for a long time to coincide with the celebrations. This gradually shifted to building the world’s tallest. In 2016, this dream became a reality when Slinningsbålet was recognized by the Guinness World Records as the tallest bonfire in the world. The record has since been broken, but with the record-breaking heights came international media attention. Slinningsbålet has made various appearances on TV shows in France, Germany, Russia, Japan, and the United States. The structure was even featured on an episode of the Amazing Race where contestants had to scale the structure to receive their next clue. And in 2019, Burger King dubbed Slinningsbålet Norway’s largest fire grill and decided to flame-grill a burger suspended from a helicopter above the bonfire! The footage of this stunt was then made into a commercial shared around the world. As of 2020, it is estimated that more than 400 million viewers have seen Slinningsbålet in appearances in national and international media.

Slinningsbålet is lit at 9pm (21) and burns for hours. A barrel is placed at the very top of the structure with a fuse attached. To light the bonfire someone climbs the structure, lights the fuse, and then climbs back down as it starts to burn. People gather around to watch along the shoreline and from boats in the surrounding waters. This year, much like last year, due to the pandemic spectators are encouraged to watch the bonfire from boats, viewing points scattered throughout the city, or simply watch the stream of it online. In pre-pandemic years, spectators gathered in crowds in Slinningen on the island of Hessa in large numbers; this is something that is discouraged for the time being. Last year among the throngs of boats, was the royal ship with Queen Sonja on board.

It is a wonderful time to be in Ålesund. We recommend planning your Norwegian vacation around this celebration, if you’re able to do so.