Home >The top things to do in Ålesund, Norway 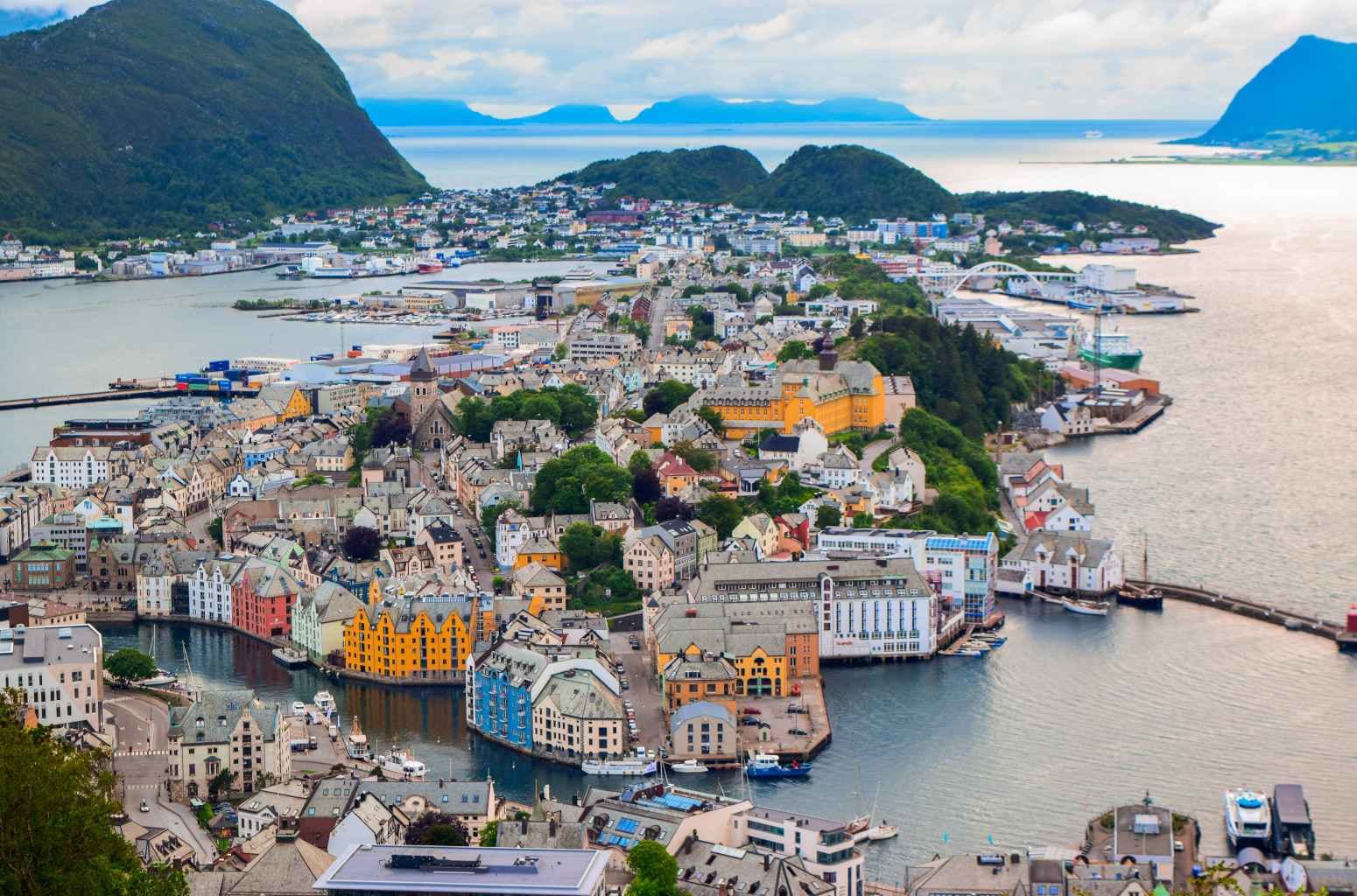 The charming city of Ålesund is a must see for any visitor to Norway. Filled with striking Art Nouveau architecture and a vibrant fishing culture, it is known as the adventure capital of the fjords. Often touted as Norway’s most beautiful city, Ålesund also has a rich history steeped in Viking culture. The famous Viking Rollo who founded Normandy and was the forefather of British royalty, had his roots in Ålesund. There is a statue in his honor (a gift from Rouen, Normandy) in the town center. With its interesting history, decorative Art Nouveau architecture, and stunning vistas over the Atlantic Ocean, Ålesund is a must-see destination when exploring Norway. We’ve put together the top things to do in this special place, the Venice of the North.

Ålesund’s iconic Art Nouveau architecture was born out of tragedy. During the early hours of the 23rd of January 1904, a fire raged through the city center. Ålesund, a fishing town, was constructed mostly of wood. In the span of 16 hours, 850 houses burned, leaving 10,000 people homeless. Miraculously only one life was lost.

The city was rebuilt with the aid from both within Norway and abroad. Kaiser Wilhelm II had been a frequent visitor to the area and expressed deep concern for the residents of Ålesund. As a result, much of the international help was from Germany in Wilhelm’s name. The town was rebuilt in the contemporary (for the period) Jugendstil (or Art Nouveau) style.

One of our favorite things to do in Ålesund is to wander through the city center and marvel at the ornamental features of the colorful Art Nouveau buildings. Join a tour and see the markers for where the fire ravaged the city and all that was rebuilt. If you want to learn even more about the Jugendstil movement and the history of Ålesund head on over to the Jugendstil museum. The museum houses many Art Nouveau pieces as well as a multi-media time capsule exhibit that takes you back to the fateful evening in January of 1904.

For more information on hours and tickets, check the Jugendstil museum website.

Hike in the City Park to Mount Aksla

In the center of town you will find the charming City Park. The park was built on the west side of Mount Aksla in 1885. A gardener designed the park where the area’s topography was the basis of its construction, a popular method of park design at the time.

The section of the park that faces the street was constructed in 1921 through 1923. In addition to a variety of plants and trees, this park also houses the famous staircase of 418 steps to the top of Mount Aksla. If you’re up for the challenge, it’s well worth it. Whenever we climb it, we’re grateful to the designers for the inclusion of several benches and viewing platforms along the way. It makes it a bit easier to take it at your own pace. If this still sounds daunting, there are guided tours that take you to the top of Mount Aksla via bus. You will still get to enjoy the same viewpoint over the beautiful city of Ålesund! Take in the views as you enjoy delicious refreshments from the café at the top of the mountain and before you leave be sure to take photos from this iconic spot.

In the park, is where you fill find the statue of the famous Viking Rollo, that we mentioned earlier. The statue was a gift in connection with the millennium celebration of the conquest of Normandy in 911, from the city of Rouen in 1911.

The other statue in the park is in honor of Kaiser Wilhelm II, in appreciation of his help after the great town fire in 1904.

For more information on our bus tours up to Mount Aksla, check here.

On the island of Hessa, one of the islands that make up the city of Ålesund, is the Atlantic Sea Park. In 2019 the aquarium was granted the status as Norway’s first marine science center by the Norwegian government.

The Sea Park is built into the coastal landscape at Tueneset, the coastline on the island and showcases life in the sea along the Norwegian coast and in the Atlantic Ocean. The aquarium has a stunning outdoor area with a view directly to the Atlantic. In the large outdoor area, there is a separate penguin park, a water play park, and a large Octopus sculpture. The park also has an underwater observatory called Seal Bay, that showcases seals everyday life in a fun and educational way.

The Atlantic Sea Park also has a lovely café with great views as well as a souvenir shop to take home a memory of Norway’s sea life, while in the fishing capital of the country.

For more information on hours and tickets, check out the Atlanterhavsparken website.

While out on the island of Hessa, enjoy a hike up to the stunning viewpoint from the charmingly named mountain “Sugar Top”. The climb up Sukkertoppen is 4.1km with an elevation gain of 450m and takes approximately one hour each way, depending on fitness levels and how much time you spend at the top. Enjoy spectacular uninterrupted views over the Atlantic Ocean and the surrounding islands, as well as the city of Ålesund.

Another one of our favorite things to do in Ålesund is to visit the folk museum for coastal Norwegian culture, the Sunnmøre Museum. Located just outside the city of Ålesund, the museum offers a glimpse into life of the Sunnmøre people from the Stone Age to modern times. Filled with many exhibits including an outdoor museum with a large collection of old traditional houses and boats, the Sunnmøre museum offers a fun-filled way to learn about local culture and history. Don’t forget to stop off at the café for a cool drink or some ice cream in the summer months.

For more information on hours and tickets, check out the Sunnmøre Museum website.

For more information on our guided tours of Ålesund that include the Sunnmøre Museum, check here.

On the beautiful island of Godøy lies a relic of Norwegian fishing culture, the Alnes Lighthouse. Established in 1876, you can climb the steep steps of the lighthouse and take in sweeping views of the Atlantic Ocean. It’s a great location to capture some great photos of the natural landscape and wander the ocean trails. Pop into the café before you leave to sample tasty local fare and peruse hand-crafted souvenirs.

For more information on a guided tour of the lighthouse with Norway Excursions, check here.

We hope that you’ll fall in love with this charming city, situated on beautiful islands and surrounded by mountain peaks, fjords, and the open ocean. There is so much to discover in this special place. Adventure is waiting!

Norway Excursions offers the following tours in and around Ålesund:

Ålesund from Fjords to Trolls

Ålesund Private from Fjords to Trolls