Home >The best things to do in Geiranger, Norway

Geiranger, Norway is a uniquely beautiful place, so it’s no wonder it’s ranked as one of the top tourist attractions in Norway. Designated as a UNESCO World Heritage site in 2005, the stunning Geirangerfjord is filled with deep-blue water, mighty waterfalls, and wild green mountains. Although the village of Geiranger is rather small, there is still a lot to see and do in the area.

We’ve put together a list of the best things to do in Geiranger, Norway to help you out. Let’s go! 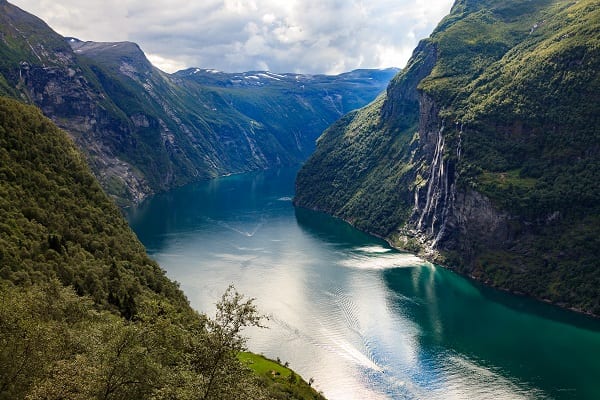 Of course the main attraction when visiting Geiranger is the fjord itself. The Geirangerfjord is located in the Sunnmøre region of Møre og Romsdal county. It is a 15km branch off the Storfjord and is one of Norway’s most popular tourist sites. The beauty of the fjord is unparalleled and is best seen by boat and from designated viewing platforms in the area. A car ferry runs between Hellesylt and Geiranger that doubles as a sightseeing vessel with a viewing platform on the top of the ferry.

Cruise ships, kayaks, and rib-boats also offer tours of Geirangerfjord. In addition to numerous waterfalls tumbling down the sides of the fjord, the mountains are dotted with charming mountain farms and wild green vegetation.

The fjord is surrounded by some of the steepest mountains on the western coast of Norway and the sides of the fjord have no shore area; the mountains erupt straight from the deep blue waters toward the blue skies. Truly a sight to behold! 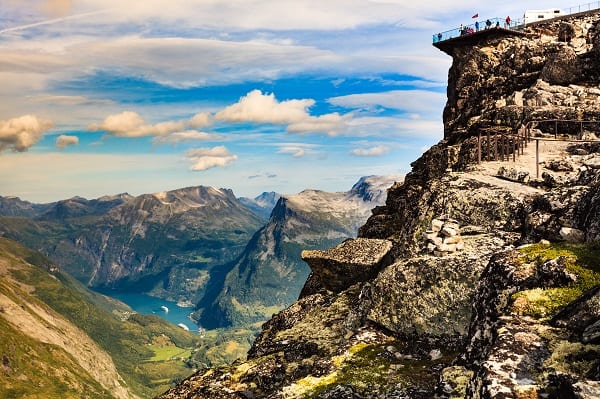 No visit to Geiranger is complete without taking advantage of the viewpoints and famous photo stops. In our opinion, the one that offers the best views is from Mt. Dalsnibba on the Geiranger Skywalk. The viewing platform was opened in 2016 and offers unimpeded views via its ingenious floor surface and glass guard rails.

You feel as if you’re floating on top of the world as you experience the spectacular vistas of Geiranger and its surroundings in a unique way. A clear drop beneath you of 500m, you can enjoy magnificent views of Geiranger, the fjord, and across the mountains and Blåbreen glacier.

Join a guided tour of Geiranger and you can sit back and let the professionals do the driving as they make their way up to the top of the mountain. You’ll also be able to enjoy a snack and snag a souvenir at the top. Fun for all! 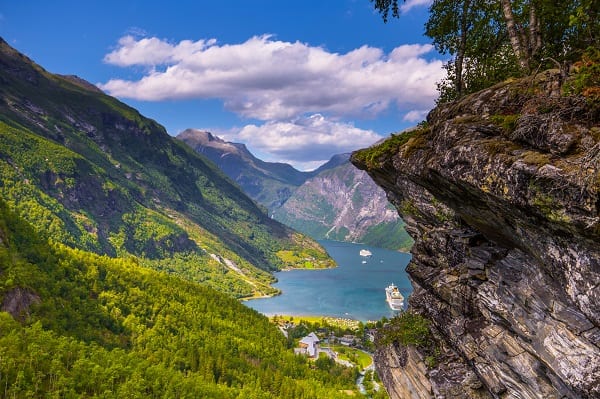 Flydalsjuvet is another vantage point from which to look over the fjord and take photos, but we’d feel remiss to not also list it as one of the best things to do while in Geiranger. After all, that’s what this region is all about, stopping and taking in the stunning scenery.

Breathe it in. And for those amateur photographers amongst us, it offers another opportunity to capture raw Norwegian beauty on film and spruce up your social media feeds. A bonus is that you pass by Flydalsjuvet on the way up to the Geiranger Skywalk, so it’s easy to combine these two stops or join a tour to hit both during your time in the area. 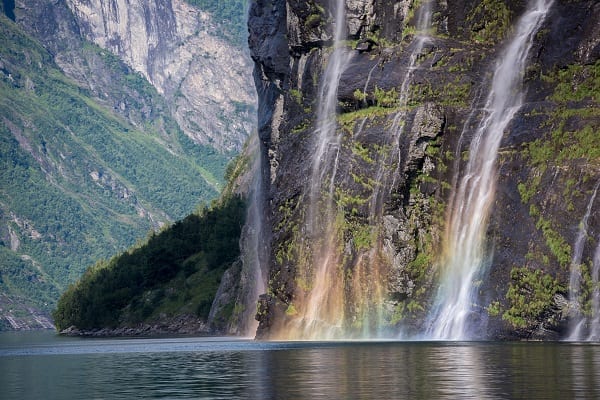 The Seven Sisters waterfalls are the most famous and most photographed waterfalls in Geirangerfjord. Aptly named for the seven separate streams flowing from the mountainside, they have an average free fall measuring 250m!

These seven “sisters” resemble the hair of seven maidens when seen from a distance as they playfully dance down the mountainside across the fjord from the bottle shaped waterfall known as “The Suitor”.

Legend has it that “The Suitor” proposed to the sisters several times and was continuously rejected, leaving the sisters unmarried while the suitor turned to the bottle. These natural beauties are best seen between May and July when snow melt is at its peak and must be viewed by boat or from the mountain farms above. 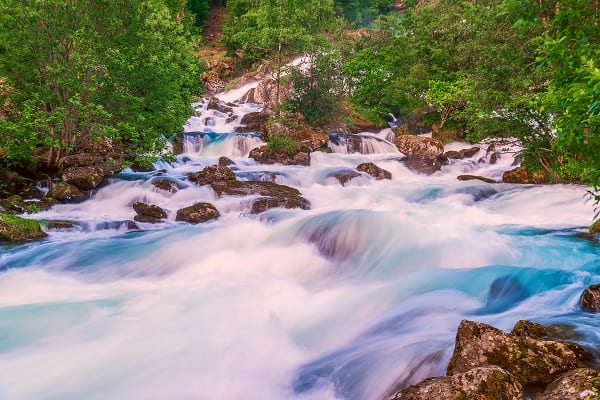 Tour the scenic waterfalls in the heart of the village of Geiranger with a hike at Fossevandring (translated as waterfall hike). This water feature makes our list of the best things to do in Geiranger, as it allows you to get up close and personal with a roaring waterfall. Climb the 327 steps and be rewarded with plateaus and high viewpoints in close proximity to the mighty Storfossen waterfall.

The walk begins in the center of Geiranger and heads up to the Norwegian Fjord Centre and Union Hotel. This fun climb offers great photo opportunities of the falls and the scenic surroundings. The waterfall hike project took 20 years and 12 million Norwegian kroner to complete!

A hike up to the rustic mountain farm of Skageflå is a fantastic way to view the fjord and get a true taste of Norwegian mountain life. Skageflå is one of the more famous mountain farms in the area as it is where King Harald V and Queen Sonja celebrated their silver wedding anniversary in 1993.

Be warned that the hike up to the farm separates the Vikings from the rest of us as it is a steep climb up the mountainside to access the farm. While steep, it is however safe; young and old alike embark on this adventure every year. After about an hour of climbing, your sweat will be handsomely rewarded with a bounty of gorgeous views and calories burned.

For those who want to experience a Norwegian farm, but could do without a strenuous climb, a guided tour to the Herdal Goat Farm is another one of our favorite things to do in Geiranger. In operation for over 300 years, this is a great excursion for all ages and fitness levels. Here you can see goats, cows, and fjord horses and even get a taste of locally made goat cheese.

While these activities made our list of the best things to do in Geiranger, there are many more hikes and farms to visit and explore in the area as well as the charming village of Geiranger itself. We hope that you’ll decide to explore fjord country for yourself and that we’ll get to welcome you to this special place.