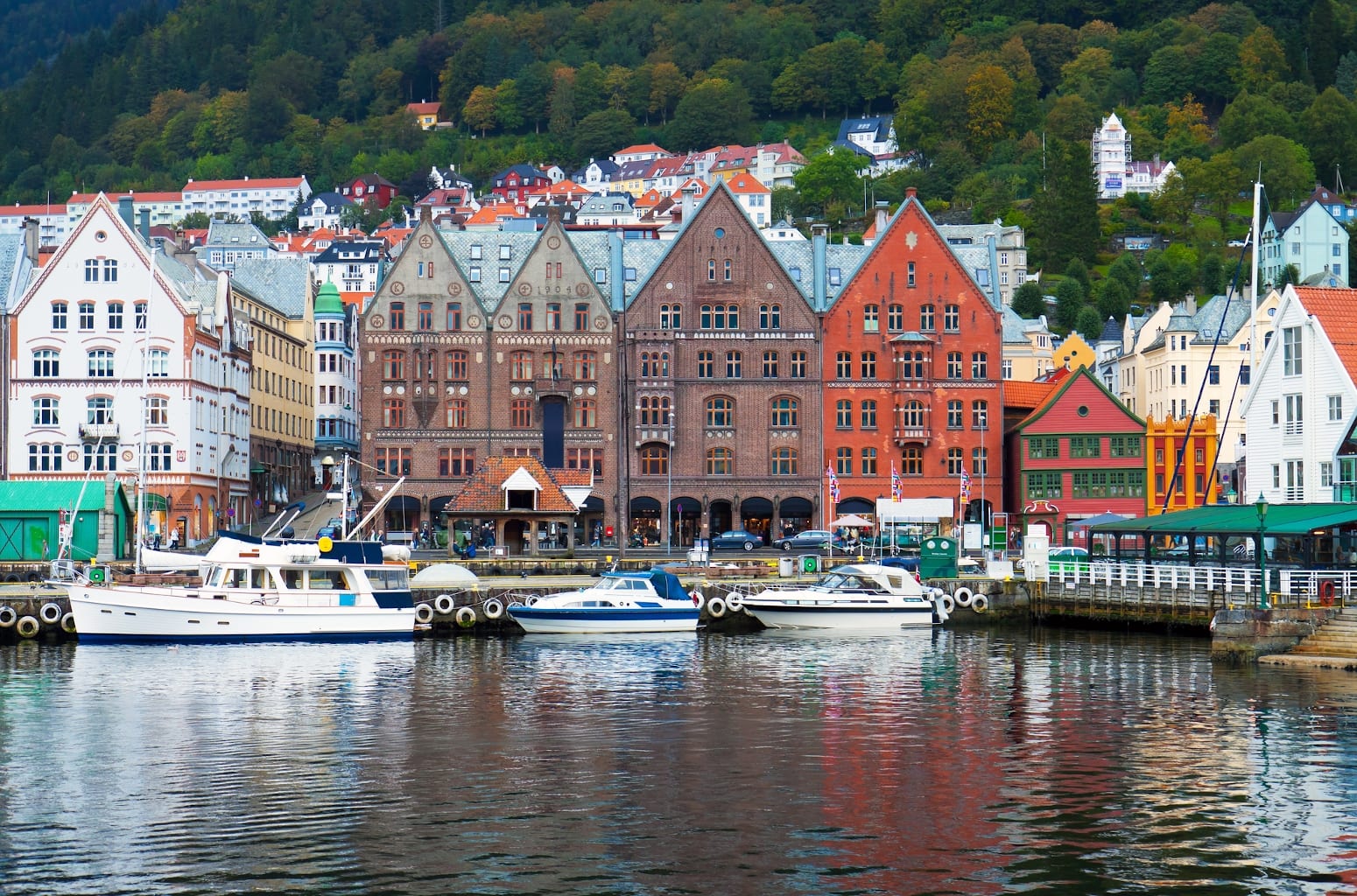 Bergen is the 2nd largest city in Norway and was at one time the capital. It is a place rich in history, culture, and natural beauty. Situated between mountains and fjords, this picturesque city is home to culturally and historically protected sites, fascinating museums, traditional marketplaces, restaurants, art galleries, shopping, and more. For these reasons, we’re devoting this week’s blog post to exploring Bergen. Let’s go!

We’ll start off our list with Bryggen, as it is one of Bergen’s main attractions. Bryggen (the dock), also known as Tyskebryggen, is a series of Hanseatic heritage commercial buildings lining the eastern side of Vågen harbor.  Listed as a UNESCO World Cultural Heritage site in 1979, today Bryggen houses museums, shops, restaurants, and pubs. The old wharf is a reminder of the town’s importance as part of the Hanseatic League’s trading empire from the 14th to the mid-16th century. In 1360, the German Hanseatic League set up one of its import and export offices at Bryggen, and dominated trade for almost 400 years. As you explore the narrow passages and historic buildings you will feel as if you’ve been transported back in time to a bygone era. Peruse the charming small shops and galleries for a special souvenir to take home with you, and don’t forget to snap a photo of the iconic brightly colored buildings that line the harbor.

No visit to Bergen would be complete without a trip up to Fløyen on the Fløibanen for a fantastic view of the city below. The Fløibanen funicular is one of Bergen’s most popular attractions. Located in the heart of the city, the scenic journey up the city mountain takes about 5-8 minutes. The Fløibanen runs on rails up the steep mountainside in modern cars with glass ceilings and panoramic windows to maximize your view. There are 3 stations on the way to the top: Promsgate, Fjellveien, and Skansemyren. At Fløibanen’s upper station there is a café, souvenir shop, and restaurant. From the viewing platform you can enjoy beautiful views of the city of Bergen and the surrounding fjord and mountainous landscape. Once at the summit, you can also embark on a wide variety of trails into the surrounding mountains and enjoy use of barbecues and picnic huts. For more information please visit the Fløibanen website.

Norway is renowned for its amazing seafood due to its countless fjords, rivers, lakes, and ocean waters. To get a glimpse (and perhaps a taste!) of this cultural staple, we recommended heading over to the picturesque Fish Market. Located in the heart of the city, the Fish Market has been a meeting place for merchants and fishermen since the 1200s. The indoor section of the market is open year-round, and the outdoor market is open from May 1st through the summer months. In addition to fish and produce for sale there are also several seafood restaurants for you to dine at.

The next spot we recommend when exploring Bergen is Troldhaugen. Troldhaugen was the home of composer Edvard Grieg and where he composed many of his best-known works. The villa was completed in 1885 and is where Edvard and his wife lived for the last 22 summers of Grieg’s life. It is now a living museum consisting of an exhibition center, Greig’s villa, the couple’s gravesite, a concert hall, composers’ cabin, shop, and café.  The site is filled with interesting memories of Grieg and has been a place of pilgrimage since it was opened as a museum in 1928. It’s not only a place of cultural significance, but one of beauty as well.  Perhaps Greig described it best when he said of Troldhaugen, “where it is prettier than most beautiful…A new opus, the best I have ever performed. No opus has filled me with more enthusiasm…” For more information on Troldhaugen and Grieg visit the museum’s website.

While exploring Bergen, a visit to the Bergenhus Fortress is a must for any history buff.  Dedicated to the resistance movement during World War II, this museum houses many important exhibits illustrating Norway’s contributions and resistance to the war. The exhibits include: women’s contribution to the Norwegian Armed Forces and the resistance struggle (1940-1945), the resistance movement in and around Bergen (1940-1945), newspapers in Bergen during wartime, the underground press (1940-1945), Norwegian forces abroad, Norwegian Independent Brigade Group, and the History of the Bergenhus Fortress. It’s a deeply fascinating and educational way to spend an afternoon.

If you’ve been dreaming of visiting Norway for a while and have been doing some research, you’ve likely seen photographs of Norway’s distinctive stave churches. While exploring Bergen, be sure to make room in your itinerary for Fantoft Stave Church. The church was originally built around 1150 in Fortun in Sogn a village near the eastern end of the Sognefjord. In the 19th century, many of the stave churches in Norway were threatened with demolition including the Fantoft Church. The church was purchased by consul Fredrik Georg Gade and saved by moving it in pieces to Fantoft near Bergen in 1883. However, on the 6th of June 1992, tragedy struck the church. It was destroyed by arson; the first in a series of church burnings by members of the Norwegian black metal scene. In 1994, Varg Vikernes of the band Burzum was charged with the burning of the Fantoft church, although jurors voted not guilty. After the fire, re-building soon begun and was completed in 1997.

Bergen has the fortune of being surrounded by what is perhaps Norway’s most magnificent tourist attraction – fjords! Situated between the Sognefjord to the north and the Hardangerfjord to the south, it’s no wonder Bergen is often referred to as the gateway to the fjords. The proximity to these natural wonders makes Bergen a great starting point for fjord excursions. You’ll find no shortage of tour companies and trips of varying lengths and destinations to fill your fjord wish list. From trips along the Sognefjord, known as the King of fjords, to the UNESCO protected Nærøyfjord, and the stunning Hardangerfjord, Bergen offers it all.

We hope you’ve enjoyed exploring Bergen with us in this blog and that you’ll come and explore it for yourself. We think you’ll fall in love with this special city too.  For information of booking a private tour of Bergen with Norway Excursions please visit the following links: