When we say “Aurora Borealis”, we are not talking about the Disney princess Sleeping Beauty, who just happens to have the same name. No, when we say “Aurora Borealis” we are talking about nature’s spectacular light show, also called “The Northern lights”. The northern lights are very common in Norway, mostly during the winter. The best place to see this light show in Norway, is up in the north. Unfortunately, we can’t guarantee that you’ll see them, because they are very unpredictable and happen most often spontaneously.

Aurora comes from the Latin word aurorae, meaning dawn, and Borealis comes from the Latin boreas, meaning the north wind. There is an actual reason why these words are also names. In fact, they are not just names of any kind of person, no, these are names of ancient Roman and Greek Gods. Let’s have a small mythology lesson. Aurora, also known by her Greek name Eos, was the Goddess of Dawn, daughter of Hyperion and Theia. According to Roman and Greek mythology, Aurora/Eos renewed herself every morning and arose from the sea in her chariot, carrying a pitcher from which she sprinkled dew upon the earth, as she flew across the sky towards the sun, announcing the arrival of the sun. She gave birth to several children, one of them was a son named “Boreas”. He was the purple-winged God of the cold northern wind and was often portrayed as very strong and violent tempered. It is said that the Greeks prayed to him when they were threatened by Xerxes, Boreas caused winds strong enough to sink 400 Persian ships.

As explained in the previous fact, Aurora and Borealis are both derived from Latin words. He combined these to together and thus established the term “Aurora Borealis”. However, Galileo thought an the northern lights were caused by the sunlight reflected from the atmosphere, which brings us to our next fact:

3. The formation of the northern lights

Time for a small chemistry lesson. The sun constantly sends electrically charged particles into space, called the solar wind. This happens with an average speed of 400km/sec, yet the speed can vary between 250 and 2500km/sec. A small proportion of these particles/ions will reach our earth after a journey of 150 million kilometers. When these charged particles enter the atmosphere and collide with oxygen atoms and nitrogen molecules, particles of light are generated. We can observe this as the northern light as we know it, when enough nitrogen molecules and oxygen atoms collide with the charged particles of the solar wind. 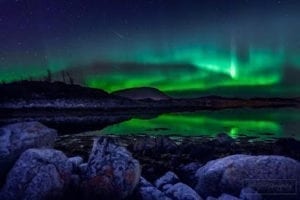 Ready or not, here’s another small chemistry lesson. Ions are electrically charged particles which consist of electrons and protons. The color of the aurora depends on what kind of electrons encounter which type of atoms. Oxygen in the upper part of the atmosphere can cause green or red light. Red light can form in the lower atmosphere when electrons in collide with nitrogen protons. Blue light is fairly rare and is caused by sunlight hitting the top of the northern lights. The traditional green light is formed by oxygen molecules colliding with ions located about 95 km above the earth.

5. We are not the only planet which Aurora visits

Enough with the chemistry, let’s get astronomical. Did you know that there are other planets out there that also get a visit from the Aurora Borealis? The lights there are, however, slightly different from Earth’s, because of their different atmospheres and poles. The northern light occurs on planets such as Jupiter, Uranus, Mars, Saturn and Neptune. Take a look at this beautiful picture of Jupiter taken by NASA.

6. There are also “Southern Lights”

These lights have same colors as those in the north, but occur on the south pole. They are called Aurora Australis, and the word “Australis” comes from the Latin word “austrālis”, which simply means “Southern”. Sorry, no mythological story for this Latin word. The Aurora Australis are only visible when it’s summer on the northern hemisphere, meaning winter on the southern hemisphere. They are nevertheless just as beautiful as the Aurora Borealis.

7. There are many different folktales about the Aurora

The Aboriginals often associated the lights with fire, which has lead to many different folktales in the Aboriginal culture. Some tribes believe that the lights are bush fires in the spirit world. Others have a darker myth and believed that an evil spirit created the lights.

A Native American tribe in Wisconsin used to believe that the lights were the ghosts of their defeated enemies who were looking for revenge and tried to rise again.

Sámi people in Finland used to believe that the lights were created by whales ejecting a spume of water. Meanwhile, the Sami children in Norway ran back inside their houses the moment the lights appeared, because according to their belief, the lights were evil spirits.

We can talk about these kinds of stories for hours, but I’m sure you get the point. 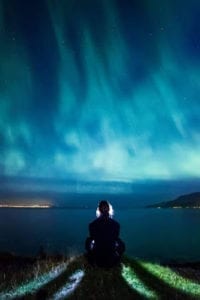 All in all, our dear Aurora has fascinated human kind for centuries and will keep on doing so as long as we exist. It’s definitely worth taking a trip to the far north or south to look at the lights with your own eyes. You will understand why the Indigenous people of our world came up with their folktales and why scientists do their research about the Aurora. You are, of course, more than welcome to join us on our ” Tromsø Northern Lights Tour – Aurora Borealis ” this winter.

What are your thoughts on the Aurora Borealis/Australis? Have you ever seen this natural phenomenon with your own eyes? Let us know
Picture 3,4,7 and 8 are taken by our good friend Iwan Groot